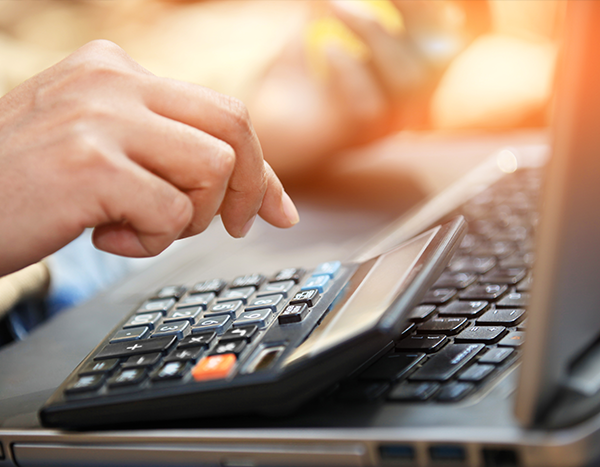 Keeping with Digital India drive, revenue authorities have been on the forefront to enable digital interface between the taxpayers and the officials. First such beginning was in 2006 with launching of the project for electronic filing of tax returns where initially, e-filing of tax returns was made mandatory with effect from AY 2006-07 in tax audit cases, with its phased implementation over a period of time, to cover almost all the assesses now, barring few exceptions. To facilitate this, e-filing portal (www.incometaxindiaefiling.gov.in) was launched as a digital interface between the taxpayers and the officials. This was followed by setting-up of CPC, Bangalore in 2009 for the purposes of electronic processing of returns filed electronically.

Taking the baton of digital drive further, electronic assessment proceedings were introduced on pilot basis in 2015 at New Delhi and Mumbai, with its expansion to other cities in 2017. Formal system of electronic assessment was introduced by Finance Act 2018 with insertion of sub-sections (3A), (3B) and (3C) to section 143 of the Income Tax Act, 1961 (‘Act’). Subsequently, E-Assessment scheme, 2019 was notified vide Notifications No. 61 & 62 of 2019 dated 12 September 2019. Under such scheme, approx. 58,322 cases were selected for scrutiny assessment for AY 2018-19.

Finance Act,2020 also amended section 143(3A) of the Act to include even ‘best judgment assessment’ as prescribed under section 144 of the Act within the ambit of electronic assessment.

With COVID-19 outbreak, physical interaction between the taxpayers and the revenue officials came to a standstill interalia due to imposition of lockdown. Various deadlines prescribed under provisions of the Act were extended, first by ‘The Taxation and Other Laws (Relaxation of Certain Provisions) Ordinance, 2020’ dated 31 March 2020 (‘Ordinance’) and then later by CBDT notification number 35/2020 dated 24 June 2020. Consequently, statutory timeline for completion of assessments during FY 2020-21 i.e. for AY 2018-19 & AY 2017-18 (for Transfer Pricing and belated return cases) stand extended to 31 March 2021.

Armed with achievement of twin objectives, vis-a-vis: expansion of the scheme of electronic assessments to a larger strata of cases, which was otherwise planned in near future and to combat COVID-19 scenario with its application to the pending assessments as well, Hon’ble Prime Minister launched ‘Faceless Assessment Scheme’ under the campaign ‘Transparent Taxation: Honouring the Honest’ on 13 August 2020. Apart from Faceless Assessments (effective from 13 August 2020), the campaign also introduced Faceless Appeal (effective from 25 September 2020) and Taxpayer’s Charter (effective from 13 August 2020) containing revenue authorities’ commitments towards taxpayer and duties of/expectations from Taxpayers. Pursuant to introduction of the Scheme by Hon’ble PM, all the assessment orders to be passed after 13 August 2020 must need to be issued under Faceless Assessment Scheme and any order passed outside the scheme (except for the exclusions mentioned hereunder) will be considered as ‘non-est’ i.e. never in existence.

The scheme is now on its path to be brought formally into the statute books by way of introduction of section 144B of the Act w.e.f. 01 April 2021, as proposed by Taxation and Other Laws (Relaxation and Amendment of certain provisions) Bill, 2020 introduced in Lok Sabha on 18 September 2020 (‘Amendment Bill’) and passed on 19 September 2020.
Apart from the Faceless Assessment, the Amendment Bill is now on its way to make all the income tax department proceedings almost ‘faceless’ for the taxpayers by introducing Faceless Transfer Pricing Proceedings, Faceless rectification, Faceless verification, Faceless revisionary order, Faceless appeal effect orders, Faceless collection/recovery of taxes, Faceless transfer of jurisdiction, Faceless compounding of offences etc.

Faceless Assessment Scheme is not applicable to the following cases of assessment:

NeAC may transfer the case to the jurisdictional officer for completion of assessment, at any stage of the proceedings, with prior approval of CBDT.

The Scheme is also explained by way of below pictorial presentation: 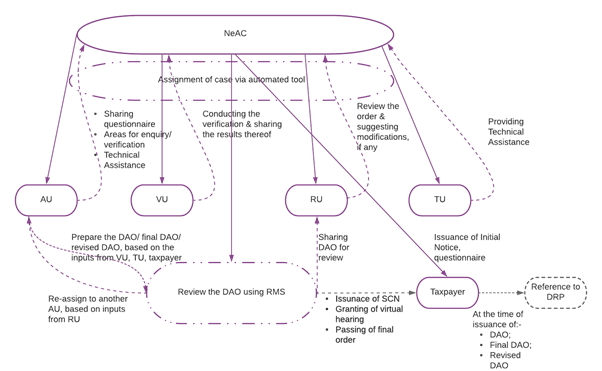 Proceedings to be taken up by the Jurisdictional Hierarchy

Other Amendments Proposed by the Bill

The Amendment bill has also proposed to move necessary amendments to enable the Central Government for formulation of a Scheme subsequently, to effect the following in a ‘Faceless’ manner, to be effective from 01 November 2020:

Just like Faceless Assessment, Faceless Appeals have also been introduced by way of introduction of sub-sections (6B), (6C) and (6D) to section 250 of the Act by Finance Act, 2020. Further, Hon’ble Prime Minister also announced introduction of ‘Faceless Appeals’ under the ‘Transparent Taxation Platform’, which will be effective from 25 September 2020. Presently, Hon’ble Supreme Court of India, Hon’ble High Courts and Hon’ble Income Tax Appellate Tribunal are also conducting virtual hearings in respect of urgent pending matters. With launching of transparent platform, the entire chain of events- right from the filing of tax return to the ultimate appeal resolution mechanism by Hon’ble Supreme Court is to go ‘Digital’ thereby realising Hon’ble Prime Minister’s dream of Digital India, at least in Direct Taxes.

In order to make Faceless Assessment Scheme as well as other proposed Faceless interactions with the tax officers a success, both the revenue officials as well as the taxpayers need to adapt themselves with the new era of virtual proceedings.

With team-based approach to assessment, one can expect qualitative queries and well thought through orders with a legal backing.

While this is a very bold and welcome step, the key/success will lie in the manner in which it gets implemented. It is learned that so far as the Faceless Assessments are concerned, in order to ensure quality in the processes, it may be further proposed that each of the four units shall provide their feedback in the automated system devised/to be devised by the revenue officials, i.e. AU at the time of submitting DAO and VU/TU/RU at the time of submitting their reports.

Some of the pre-cursers for the Taxpayers under the ‘Faceless Era’ would be to ensure:

For the purposes of bringing transparency in the virtual platform, Prime Minister also unveiled Taxpayer’s Charter which need to be adopted both by the revenue officials as well as the taxpayers. Keeping the momentum positive, let us hope that this will transform India as a destination for ‘doing business easily’ thereby making it ‘Atma Nirbhar’.

The above article is authored by Anita Basrur, Partner at Sudit K Parekh & Co. LLP. The views expressed our personal.